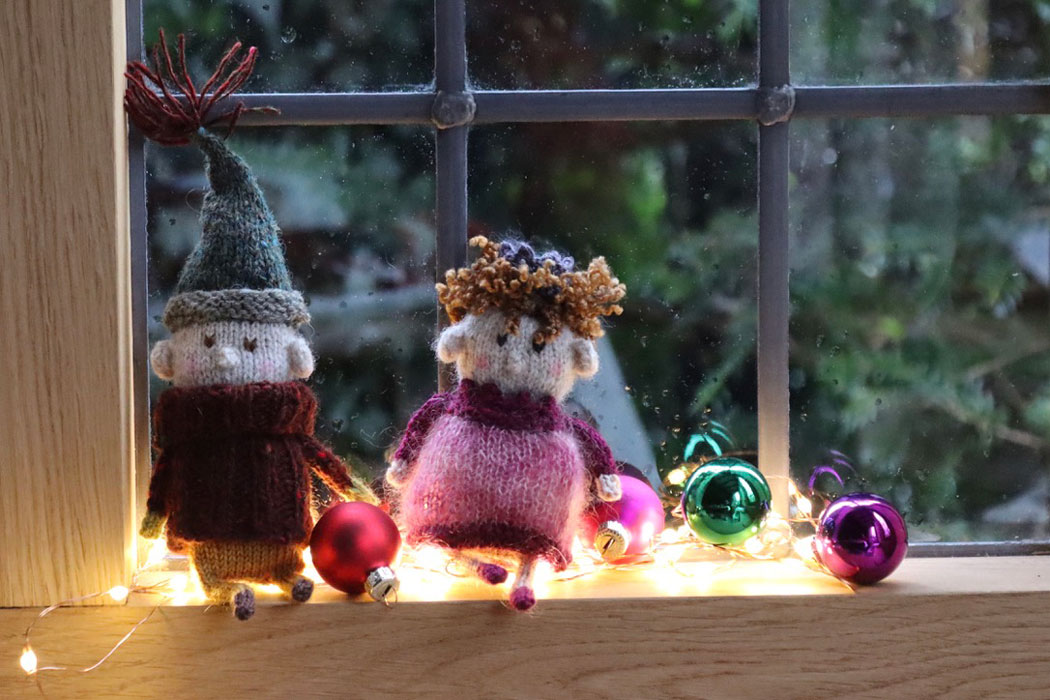 During lock down to make Nicola laugh I sent her a gnome in the post. Who doesn’t raise a titter at a surprise gnome? In return she sent me a fairy, more Mavis Cruet than Cinderella. Here is the pattern if you’d like to make your own (watching Willo the Wisp is purely optional but highly recommended).

If you don’t have the correct size needles then a size up will be fine.

There’s a splendid step by step for i-cord here

With 2mm DPNs and toe colour cast on 5 sts using the long tail method. *Slide the sts to the other end of the needle
Bringing the working yarn from behind and knit the first stitch, pulling the yarn snug, k to end of row.
Repeat from * for 4 more rows.
Change to leg colour
K 13 more rows of i-cord, break yarn leaving a length approx. 30cm.

Repeat with the second leg but don’t break off yarn.

Work the body
Knit 5-8 rounds for the top of the legs.
Work 16 rounds of stripes for the body. If you’d like to try helical stripes there is a video here

Change to head colour and work a further 7-9 rounds.

Arms (make 2)
With 2mm DPNs and hand colour cast on 5 sts using the long tail method. *Slide the sts to the other end of the needle
Bringing the working yarn from behind and knit the first stitch, pulling the yarn snug, k to end of row.
Repeat from * for 4 more rows.
Change to arm colour
K 13 more rows of i-cord.
Sl2, k1, psso, k2tog, pass right stitch over left and pull yarn through.

Hat brim
Pick up the right hand leg of the first round of hat stitches, 10 sts per DPNs. You’ll have the point of the hat in the middle of your three needles.
R1: K1 round using rim colour
R2: P1 round
Repeat R1 and R2 twice more
Cast off loosely.

Jumper
Using 2.5mm DPNs cast on 38 sts, join in the round making sure not to twist.
K2, p2, repeat to end.
Work the desired length, approx. 7cm.
Cast off.

Sew in ends, except for tip of hat. Wash and block pieces.

Stuff the head
Starting at the back, weave a thread the colour of the body or head through the top row of body stitches leaving a length at each end. Pull the ends and tie a knot.
Sew in ends
Stuff body and sew up bottom seam.

Pull on jumper pulling it up far enough to allow for a polo neck. Sew arms to side of neck through the jumper. Roll down jumper neck to hide the top of the arms.

Make a tassel for top of hat and fasten the cast off end by running the thread vertically down to the middle of the hat. Pull it slightly to make the tip curve down and fasten off.

Use a red pencil to colour in the cheeks.

Hair
With 2.5mm needles and hair colour cast on between 12-20 sts.
Knit a garter st square.
Cast off.

Crown
With 2mm needles and crown colour cast on 16 sts.
K 5 rows in garter stitch.
next row: *cast on 2sts, cast off 4 sts, sl last cast off st back on to left needle, rep from * six more times, cast off last two sts.
Join to make a circle.

Sew in ends, except for base of wings and crown. Wash and block pieces except crown.

Stuff the head
Starting at the side, weave a thread the colour of the body through the top row of body stitches leaving a length at each end. Pull the ends and tie a knot.
Sew in ends
Stuff body and sew up bottom seam.

Run a three the same colour as the hair through the centre of the square, pull end to lightly gather. Using these ends sew to top of head with the gather running back to front. Cut the edges of the knitted off and unpick the stitches to give fizzy hair. Trim if needed.
Sew crown on middle of hair.

Put on dress and sew on arms.
Sew wings to back through the dress.
Sew eyes using duplicate stitch.
Use red pencil to colour in cheeks.

Not sure what to do with your gnome/fairy now you’ve made it? They make splendid tree decorations, string together to make gnomish bunting or embroider the recipient’s initial on the front and use it as a gift tag.

Or send to someone in the post for no reason what so ever.